A quality motherboard is an essential part of any computer system, but it becomes all the more important when you’re a gamer. If you wish to fully experience your games, you need to find a reliable motherboard to serve as the foundation of your system. MSI is a manufacturer of such motherboards and in today’s review we’re going to be examining the brand’s H110M Gaming in an attempt to help you decide if it is the right motherboard for you.

Quick Navigation
Who is this product for?
What’s included?
Overview of features
Specification
Tutorial
Alternatives
Conclusion 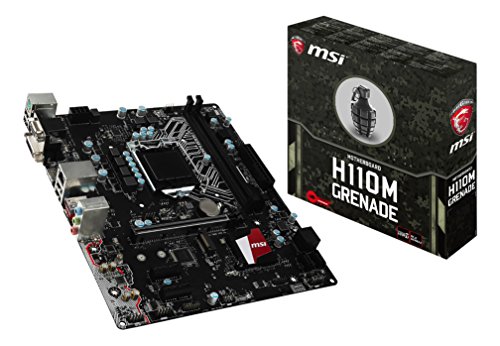 MSI has long been one of the most popular names in the gaming motherboard industry and has been behind some truly impressive motherboards since opening its doors. Its H110M Gaming motherboard was first made available online in January of 2016, so it isn’t the most recent offering from the brand, but it is nonetheless noteworthy for its many features.

Who is this product for?

MSI designs motherboards for hardcore gamers and gaming novices alike, with the H110M Gaming being arguably best for those who fall into the latter category. Because this is a budget motherboard, it is missing certain features that most fanatical gamers look for when in the market for a motherboard. That being said, this motherboard has a great deal to offer casual gamers and can be purchased for less than $70 from most sources, so if you’re trying to develop a gaming arsenal on a budget you should certainly consider it.

Purchase the MSI H110M Gaming and you can also expect to receive an I/O shield, two SATA cables, and a driver disk. MSI also includes two separate instruction manuals with each purchase of this motherboard. The first of these instruction manuals is a quick installation guide, intended to expedite the setup process, while the second is a more in-depth look at the motherboard and what it is capable of.

The MSI H110M Gaming boasts some pretty impressive features, among them its DDR4 Boost. MSI’s unique DDR4 Boost technology uses optimized traces and fully isolated memory circuitry and in doing so protects the motherboard against the distorted memory signals that often result in a lackluster performance. In manufacturing this motherboard, MSI used Military Class 4 components to defend its most vital parts from the wear and tear that commonly comes with frequent long gaming sessions.

The MSI H110M Gaming is primarily marketed towards gaming novices, so if you are considering purchasing it, it’s likely you have no prior experience with motherboards. If you are not confident in your ability to safely fit the MSI H110M Gaming in your system, we recommend watching the below video installation tutorial.

If you are a dedicated gamer and are not convinced the MSI H110M Gaming is capable of giving you all that you need, there are countless other gaming motherboards for you to choose from, many of which come from the same manufacturer as the H110M Gaming. Take, for example, the MSI Z370-A Pro. The Z370-A Pro will set you back a little more than the H110M Gaming, but for the extra money you’ll get a motherboard that features Military Class 6 components, superior audio quality, and MSI’s Super Charger USB ports, which are capable of charging connected smartphones and tablets in no time at all.

Now, the Z370-A Pro is not particularly impressive when it comes to overclocking, so those who are determined to pursue overclocking may want to take a look at the ASUS ROG Strix Z370-E Gaming, which uses five-way optimization so even novice gamers can overclock (albeit automatically).

Although the MSI H110M Gaming may not be quite as impressive as some of the brand’s more recent – not to mention more expensive – offerings, it has a great deal to offer those who have only just decided to pursue gaming as a hobby or veteran gamers who have neither the time nor interest to invest in the maintenance of a more expensive alternative.

While it is not suited to overclocking, it promises everything the newbie gamer requires to experience their games and goes for well below $100, so it won’t drain your bank account like some other motherboards on the market. With its Military Class 4 components, you can be virtually certain that the MSI H110M Gaming will hold up under years of regular use, meaning you won’t have to buy another motherboard until you are ready to upgrade to a more advanced model.